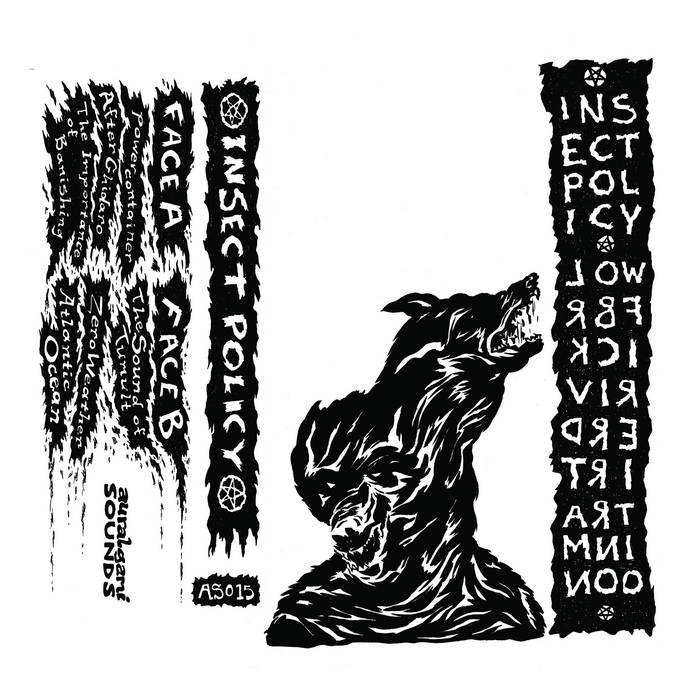 INSECT POLICY is a shot of blue bubbly Windex in a birthday party glass. They're like some urinal water from an American legion club. A collective of various schemes barely/tightly assembled for fisticuffs from the future in a wingdings font that smells of smelt. Attempts to disable the prospects of vacation-shaming have failed with subsequent quests for mayo in Mexico. Music to transform into wolves at will with.

WOLF BRICK RIVER DIRT TRAIN MOON is INSECT POLICY’s second EP and is the follow-up to their debut A CONTENTION OF CREEP FISTS (auralgamiSOUNDS). While …CREEP FISTS saw IP founder Brian Manley (The Smacks) unilaterally manning the creative controls –the writing, playing, and recording were all done by him—and then subsequently assembling a group of four humans to perform it’s beautiful noise live, WOLF BRICK RIVER DIRT TRAIN MOON was written and recorded as a group. Tyler Chanley (guitar/clangs/pizza), Douglas Lucas (bass/electronics/vocals), and Chris Martin (drums/vocals), all of whom were in the original live incarnation of IP, contributed to WBRDTM…

WBRDTM was recorded at Dracula’s Casino in Louisville, KY, on a snowy Saturday in March, 2015, by friend of the band and engineer Jim Marlowe (Tropical Trash, White Reaper, State Champion). To maintain the experimental urgency of IP’s now infamous live shows, they played these songs only once in a basement the week before recording and didn’t show them to drummer Chris Martin until right before the record button was pushed. Writing was finished in the studio that day. To round out the sounds, or perhaps put some dirt in the river, Louisville chamber musicians Rachel Short (French horn) and Aaron West (violin) added finishing touches.

With WBRDTM, INSECT POLICY find themselves in the enviable position of a band that gels so well together in a live setting that they can fearlessly approach the recording process as but another way to bend and twist and fuck with their own expectations of their music. One can only imagine that all the laughter and strange looks and eye-rolling on stage is happening tenfold behind closed doors.

Expect more music and striking live performances from IP. Now they all have keys to the practice space.

Bandcamp Daily  your guide to the world of Bandcamp

Featuring interviews with the mighty Hiatus Kaiyote and genre-busting L'Rain.